The Organic Inducer is a mindfully crafted Live session template which provides a staggering array of luxurious sounds and effects with a balance of elegance and complexity. The powerful and intuitive macros bring possibilities to any unique and engaging sound design.

It contains samples of some of the most unique synthesizers in the world, including the Lyra-8, Folktek Matter, and Eurorack modular synthesizers. It also contains many foley sounds, as well as organic drum kits, and field recordings. This is an unrivalled source of inspiration for creating unique synthesizer tones.

One of the reasons we created this product came from the numerous requests from friends and clients who felt lost at adding depth to their music. For many people, textures are always a dimension of sound design that is difficult to master. It also requires a lot of time to carve out elements that really bring a song all together.

However, people often ask what the advantages of using a minimal house texture pack is. They also wonder if it affects their artistic integrity. In this article, we go over these questions, as well as flush out what the Organic Inducer minimal sample pack, and texture template can do.

What Is A Minimal House Ableton Template?

The Ableton Live Template is a project that’s created, configured and saved for later use. Its structure comes from using exactly the same process as a song. The template is tailored so that it is used on each new song you create. It usually does not include the entire song as MIDI or audio, but it can contain the elements used in most songs (for instance, a MIDI kick or a hat pattern, or an audio sweep). A good example is The Default Project Template, which shows up every time we launch Live, is a template that we can use repeatedly. 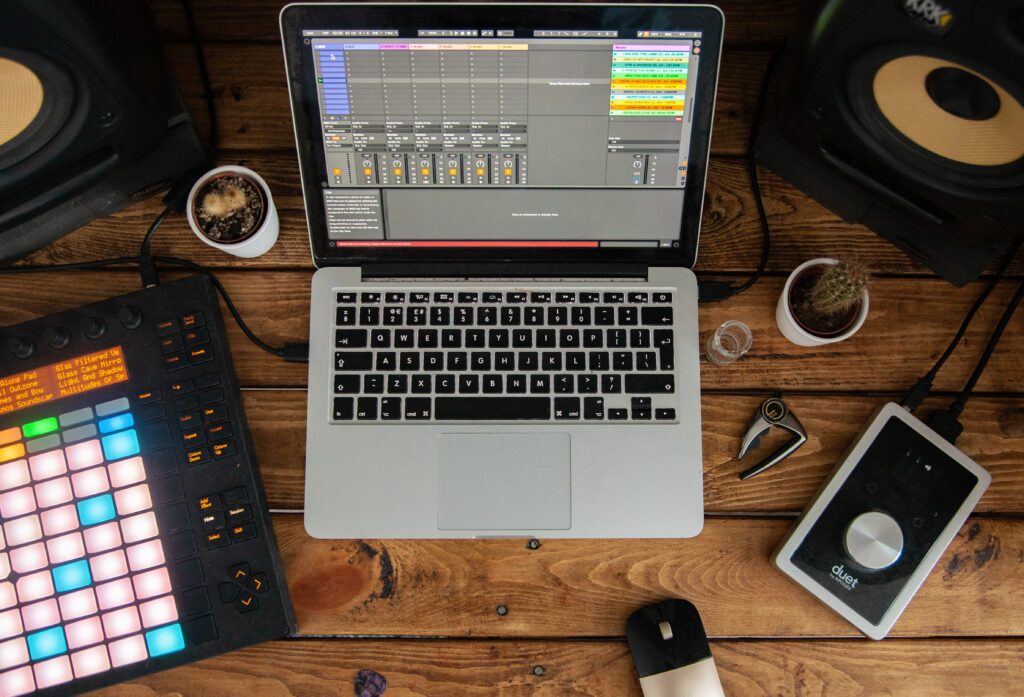 How Does A Minimal House Ableton Template Help?

We can generate any type of template you are looking for. The idea for the templates below is to satisfy some or all of the following requirements:

What Makes The Organic Inducer Different?

The Organic Inducer is a different kind of Ableton template that concentrates on the textures that make minimal house so alluring. Rather than being an arrangement template, the Organic Inducer exists to make sound design a fun, engaging process, rather than one with lots of technical ins and outs. You can easily import these samples into a new arrangement, or even arrange directly in the template. However, like we said, this minimal sample pack and texture template is primarily used to design fun, novel tones and textures.

Often, in some of the top minimal house gems we love, there’s an absence of motif or catch phrase and the song heavily relies on texture and hard to catch ideas. These are actually part of the ASMR movement in a way which has made its way to techno. The idea came basically from analog infused production that has some of a noise floor which makes it really warm to the ear. But one can’t have enough of it and with time, people started decorating their music with more elements that just simple noire.

By using its preconfigured effect chains, and macros, with just a twist of a knob, you can use this to manipulate either the samples that come loaded into it, or import your own. Depending on how you use it, you can either lightly texture the samples, or completely destroy and deconstruct them, transforming them into something that is barely reminiscent of the original sample.

There are 75 samples on this minimal house texture pack and template, where each sample says itself out on multiple tracks. Each track has its own set of macro controls to control its own unique signal path. There are many possibilities: similar samples can be processed in different ways, you can experiment with different audio-effect racks and their controls, and there are numerous other possibilities.

The samples that producers can manipulate are drawn from the Lyra-8, the Elektron Rytm, the Folktek Matter, Eurorack modules, as well as dozens of foley room sounds, acoustic drums, and field recordings. You can also import any sample that you want, as well.

Is It Artistic To Use A Minimal House Texture Pack?

Now, some people might not be too excited about using other people’s sound design, and that’s fair. Part of the magic of electronic music is that it allows producers who of minimal house to create a minimal house Ableton template of their own, using the dizzying array of plugins included within the software, as well as external VSTs. It’s this exploration, and artistry that give rise to unique, genre bending compositions that become the vanguard of futuristic music.

However, let’s look at it in the context of music as a whole and use the example of a guitarist. Many guitarists use the rigs of other famous guitarists. For instance, Jimi Hendrix used an Arbiter Fuzz Face fuzz pedal, a Vox Crybaby Wah Wah pedal, and an Octavia octave pedal to create his sound. However, he certainly wasn’t the last to use this setup as a basis for their rig.

David Gillmore (Pink Floyd), George Harrison (The Beatles), and Pete Townshend (The Who) would all use similar setups, augmented with their own chain, in order to create their distinct, forward thinking art for the time. They just used it in different ways, making it so Pink Floyd didn’t sound like The Who, just as much as The Who didn’t sound like The Beatles. While they all could have, in theory, created similar music, they didn’t.

But TheY Didn’t Use A Minimal House Texture Pack

You’re right, these guys didn’t make electronic music, let alone music using a minimal house texture pack, so it’s a moot point. Especially in the 60’s and 70’s, the idea of using a graphical interface to make music is a little absurd. There certainly were no guitar rock Ableton templates, let alone a minimal house Ableton template. The previous point was to illustrate that since there were effects, people were copying other people’s effects, which were in a sense, templates.

However, let’s concentrate on electronic music then. If we are using Ableton, whether that be a minimal house Ableton template or not, we are usually using some native plugins, whether that’s the EQ, compressor, delay, reverb, etc. However, despite this, Ableton is capable of creating hundreds of different styles, and genres of music that don’t sound like each other. Same goes with minimal house textures using these plugins – many sound completely unique, yet they used the same foundation.

This is the beauty of the Organic Inducer pack. While everyone who uses it has access to the same thing, the sounds that come out of it are drastically different, based on what module you use. Additionally, these modules are set up to accept any sample you put into it, so you can mess with the signal chain across many different tracks and channels, and route them in as many creative ways you can think of.

Remember, The Greats Use Presets And Sample Packs

In this feature with Resident Advisor, Dutch dubstep producer Martyn is talking about how he was in love with a sound in a Jeff Mills song that he thought “was from outer space.” However, one day, he bought a synth, and saw that this otherworldly sound was just a preset. He doesn’t name the song, or the synth, but it just goes to show that even genre defining artists use presets.

Another example of using sample packs is the Amen Break, the most used 7 second loop in history. It’s been used in hip hop, drum and bass, and a litany of other genres. How about the four to the floor, 909 or 808 kick, hi hat pattern? How many times has that been used?

For more info on how the Organic Inducer texture template and minimal sample pack works, as well as to preview the sounds, check out its dedicated page.

“ Always a real pleasure to receive masters from Pheek, I have been working in many past releases in the past and it never disappoint. Just the right amount of frequencies push delivered with a very soft touch. As a result the tracks never loose their nature and sound just right with no beefy heavy processing ”
Doubting Thomas
Order Now