Create Your Own Concept Album

I was recently discussing a concept album I did in 2015 entitled Tones Of Void, and I was asked about my views on what makes an album unified. It’s an important question if you want to create a concept album: how does one come up with a theme, or create their own style?

Let’s start with a basic understanding of a genre and its origins, say techno for example (since it’s the one I know the most). If you watch documentaries about some of techno’s pioneers, like Juan Atkins, Richie Hawtin or others, they’ll often talk about how when they began as music producers, they just made music with whatever they had or could get their hands on. In our current era, with its overwhelming abundance of plugins, sound banks, presets, hardware and the like, many people follow sites like Synthtopia to keep up with all of the latest toys. But in 1987, they weren’t as common or affordable.

These weren’t really deliberate choices or statements. They simply came from what was available. 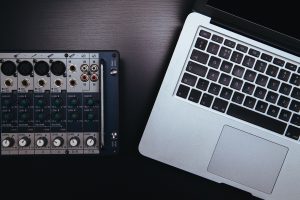 Knowing that sounds define a direction, a good way to start is to select a bank of sounds that will be used for your concept album. Try to be hard on yourself here, and remember that less is more. It will sound cruel as hell, but the fact is that a more restrained selection will prevent you from getting stressed searching for new sounds, and it will help you focus on production.

A good example of sounds that fit within a concept or genre would be dub techno. You will hear the first 5 seconds and immediately know the exact genre, sounds, and pretty much what the rest of the track might be like. Labels like Basic Channel or Chain Reaction (personal favourites) have built an entire catalogue from their sounds, and left a precious legacy that strongly influenced hundreds of later artists and labels who followed their ideology.

TRY THIS: Pick about 10 sounds, and create yourself a drum rack in Ableton that will be used over and over.

On my Tones Of Void album, what made each track similar was the use of a macro template on several sounds. This stimulated so much creativity and productivity for me that the whole album was recorded in a 3-day span while on vacation in Florida. It was such bliss that I even had to stop myself from making twice as many tracks! You have no idea how exciting it is to open a new project, drag and drop your favourite macro, and then just play sounds through it to see what will happen.

For another great example of a specific music style, we can point to the emergence of the popular Romanian techno, lead by the dudes of Arpiar. One of the characteristics of this genre is the intense use of reverb effects. It sounds very puzzling at first, because some tracks feel completely hollow, like you’re standing inside a huge reverberation room. But it creates a very pleasurable feeling.

TRY THIS: Get a collection of random effects and group them into a macro. This will allow you to unify your sound design with an overall aesthetic. If you own Max for Live, I’d say to drop some LFOs in there or get new ones, and assign them to some parameters. This will be your swiss army knife for sound design.

TRY THIS TOO: Matthew Herbert had a really interesting approach regarding the use of effects. He would start a new session using a board, but wouldn’t initialize the board for the next song. That would sort of pre-determine the sound levels and effect assignments for certain sounds, which would automatically create new ideas. You can do this by using the most recently used session to start a new one, while leaving the effects on certain channels to see what it does. Happy accidents will happen!

Having a similar structure from song to song is another thing that can help unify your concept album. Think of how important song structure is in pop music, or in EDM today, with its famous drop that you just know has to happen at one point or another. In most dance music tracks, the breakdown and relief sections play an important role for crowd response on the dancefloor. If you want to create your own concept, explore the use of a similar song structure throughout the album.

TRY THIS: Just like in the previous step, opening the last project and just swapping samples in the arranger section can be a good way to explore this. You can even leave automations on and see what happens.

With these 3 steps, you can easily create a series of new tracks that could be the beginning of a concept album. But the first thing is always to finish the tracks you’re already working on, and if you are lacking inspiration, you can apply these steps to help give your current projects a new direction.

“ J.P. is a great teacher and audio engineer. I've been having monthly coaching with him for a little over a year and my production has gone from never finishing tracks to having an EP release on a label with global distribution in a few months. ”
Adam Wendt
Order Now