Like with any creative work, writer’s block can be a very frustrating and demoralizing thing for producers of electronic music. Many artists spend hours and hours wrestling with their ideas just trying to come up with something new – but what if what you were looking for was already under your nose? What if old tracks that you thought weren’t good enough to release were actually the seeds of something brilliant?

I’ve found there are many practical ways for electronic music producers to beat the writer’s block and jumpstart their creative process. Recycling old tracks is a great place to start.

Generally, producers might make between 5 and 10 tracks before stumbling on the one that they love. But then, we’re also our own harshest critics! I’m not going to address the tracks that don’t even get done as we all have a huge collection of those.

The truth is that each song has something cool in it, even if it’s not good enough for release.

Elements (or “stems”) of old songs, whether it’s a kick, a bass line, a loop, or a vocal sample, can be remixed and made into something completely fresh.

It’s important to remember that remixing is the most accessible part of music production. Reusing stems, loops and parts of old tracks instead of starting fresh can kickstart your creativity and help you jumpstart a new song. This isn’t just about saving time. More importantly, it will make the creative process less intimidating and more exciting by allowing the creative juices to flow more freely. When you start with small ideas, bigger ones follow.

Pulling your inspiration from old material can also be a fantastic way to re-appreciate your own work. This will in turn boost your confidence and momentum as a producer.

To get you started on recycling old tracks, here are a few tips to think about: 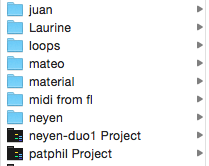 Recycling old tracks can be an extremely practical, effective, and (most importantly) fun way to beat writer’s block and take your production to a dimension you rarely visit. It will make you feel less stale and more fulfilled in ways that will surprise you, and it will encourage you to develop new styles or rhythmics.

Give it a try!